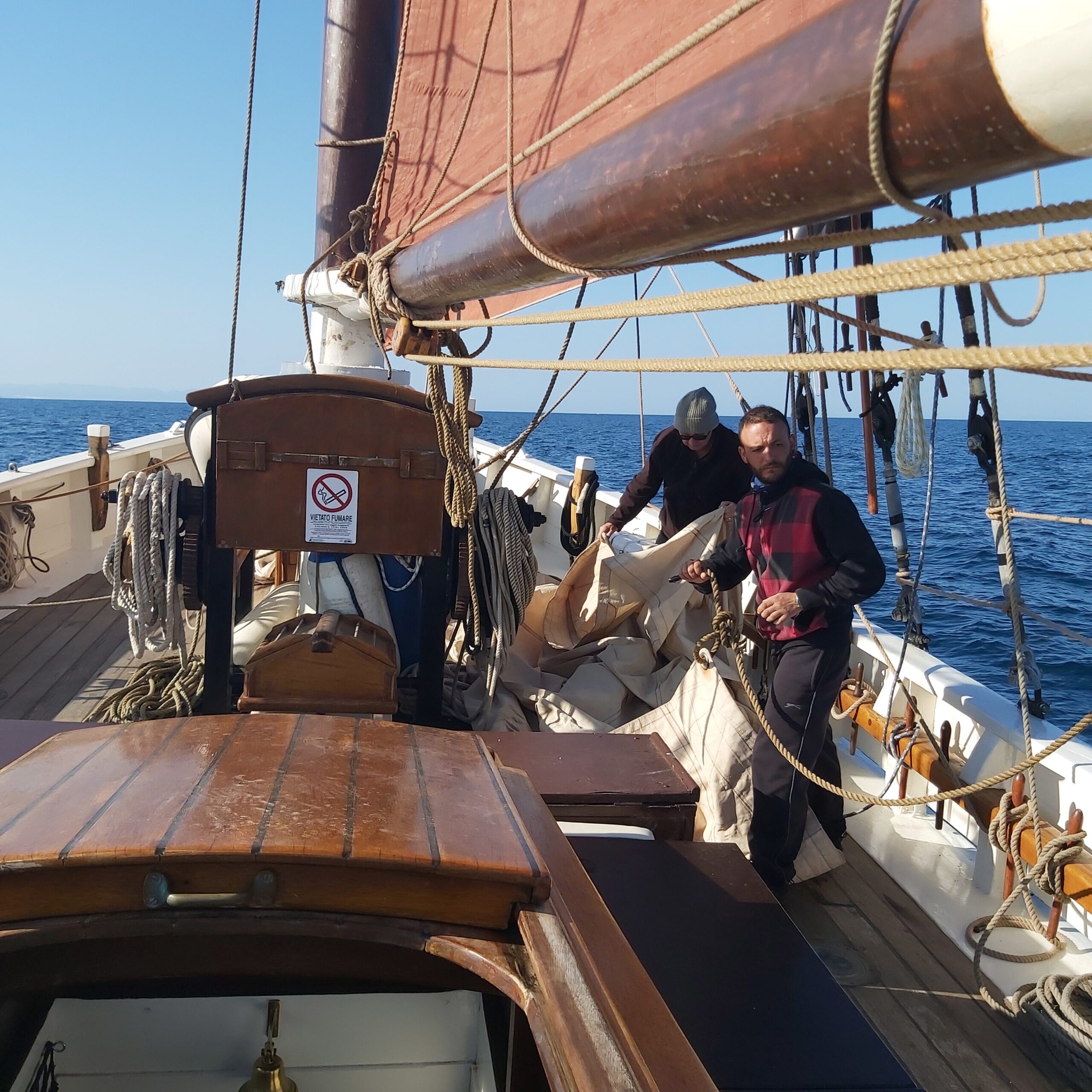 We are so pleased with ourselves right now. Our long awaited plans to sail Andrea Jensen to Tunisia were realised last month. The 5 crew all arrived in Alghero from various parts of the UK on April 16th. The voyage was necessary due to Brexit and the 18 month rule for British boats located in EU waters and was not without its challenges. These however, were swiftly overcome, due to the experience and knowledge of Colin and the supportive crew we had gathered together for the trip. We left Alghero port not once but twice (due to a problem with the engine heat exchanger failing) and needed to be towed back into port for the 1st time ever. All engine issues now fixed (new heat exchanger installed) by Colin and our new friend and 2nd skipper Davide, who was part of our able crew, we finally departed south, 2 days late, on 18th April, down the west coast of Sardinia, on our maiden voyage to Tunisia (the day after my birthday).

The wind was favourable and we sailed 50% of the way to Oristano bay, arriving after 9 hours. Colin and Davide refined the new rigging for the main top sail along the way too and this was successfully flown for the first time on Andrea Jensen under our ownership. Colin was delighted to see it rise above the main sail. The sails were dropped and we picked up a mooring buoy and rested peacefully for the evening, quietly satisfied. We set off early the next morning on the 2nd leg of the voyage, (planned to take 24hrs) and headed for Carloforte Marina on the small island of San Pietro, west of Cagliari. This was our first overnight leg of the voyage and the crew were fantastic. We split the crew into 2 main, 4 hour shifts, one skippered by Colin and the other by Davide, our Sardinian born, 2nd in command for the journey. The rest of the crew namely Finn, Lauren, Paul, Lara and myself supported the 2 skippers, 4hrs on 4hrs off. This worked famously and we arrived safely In Sifredi Marina, Carloforte, on the morning of Thursday April 21st. We motor-sailed the whole leg as the wind was not strong enough to allow us to switch off the engine (and we did not want to delay the journey south). A true test of the engine which was now thankfully, performing well, much to our collective relief!

The 3rd leg of the journey to Tunisia was delayed by 4 days unfortunately, due to high seas and we did not set off from Carloforte until early Monday morning. With excitement in our hearts (and some trepidation, it would be true to say) we set off at 1st light, on the 24hour journey across the Mediterranean to Tunisia. The journey went exactly to plan and we arrived 24 hours later in Bizerte to a very friendly welcome. We remained awake a further few hours to clear Tunisian Customs but this was very straight forward and went with out a hitch. The boat was searched and a Dr came aboard to examine our Covid vaccination documentation. All as in order! We were issued with health passes and allowed to disembark and explore Bizerte further.

Tunisia was welcoming and friendly. We had pulled up alongside the main harbour wall outside the Marina Office and were allowed to stay there for 1 night as we were due to leave the next morning back to Sardinia. The crew took a well earned rest and after a few hours sleep and a shower, some of us went ashore to explore the local town of Bizerte. The town centre was buzzing, the open air markets were in full swing and Finn and I looked around with huge smiles on our faces. Of course, we could not resist some fresh local delights. The strawberries were ripe and the deepest red I had ever seen! Fresh bread, croissants, dates and sweet pastries were all enthusiastically purchased.

Paul, Lara and Davide did exactly the same and discovered tasty pistachios, salad, fresh peas, broad beans, freshly ground coffee and more Tunisia sweets and cakes were brought back to the boat. Our stores were replenished and the aroma from the galley and saloon was inviting and delicious. We all headed out in the evening, hopeful of eating some local Tunisian delights, only to discover that it was Ramadan (we had actually known this) and the food choices were very limited before 10pm. However, we did manage to find a friendly establishment overlooking the main old town fortress wall and had a meal together but it was nothing very special unfortunately. We discussed the next leg of the voyage together over the meal, 48 hours, non stop, back to Alghero, departing the following morning! Eat up everyone, sleep is required!

Most of the crew had flights booked to return to the UK the following Saturday, so we were under strict time constraints, to get us all back to Alghero and could not afford for there to be any further delays. It was agreed that non stop back to Alghero was a doable plan, with the wind and sea conditions, thankfully, favourable. We set off early Wednesday morning from Bizerte and set the sails as soon as we left the harbour. Andrea Jensen was homeward bound for Alghero!

The 4 on 4 off shift pattern continued well for the return leg and the crew discussed meal plans etc. I made my 1st ever Spanish Tortilla, having been taught a few days earlier by Lara (Spanish and a great cook), I was a little under pressure to pull it off and not to disappoint everyone. Thankfully the Tortilla seemed to turn out of the frying pan well, all but Colin (non egg eater) devoured it willingly, during the relatively cold nights sail. The sea was a little bumpy, with the waves coming from behind onto the beam most of the way, so we kept the sails up to try to steady the rolling motion, which worked well.

Paul and Finn had mastered the roasting of aubergines and fresh green chilli peppers on the galley’s small, gas stove, for their fabulous vegetarian curries. We were all still smiling even though the Tunisian fresh, green chillies were large and a little on the spicy side.

After motor-sailing for 46 hours, Andrea Jensen arrived, safely in her berth in Aquatica Marina, Alghero, on the morning of Friday 29th, with a very proud and relieved crew onboard. We had completed a sea journey of 485 miles in 5 days. This was a truly unforgettable experience, some of the crew were complete sailing novices. A fantastic boat and crew, pre planning, great team work and enthusiasm for the task was what made it successful. Thank you to you all of the crew for making this happen. See you in 18 months time to do it all again! 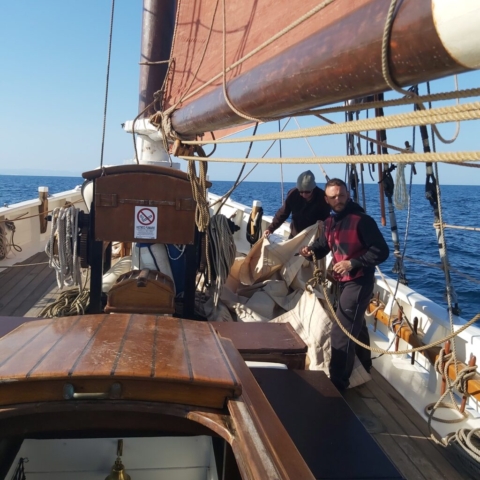 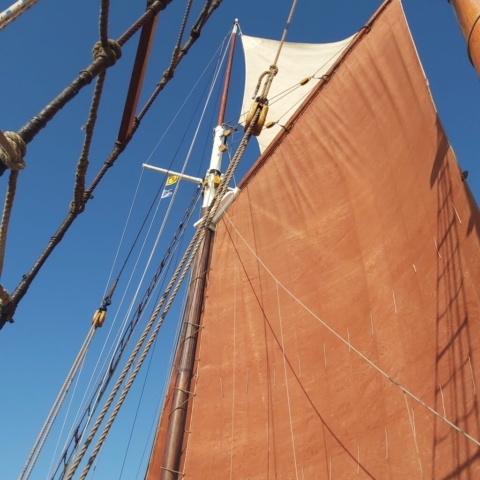 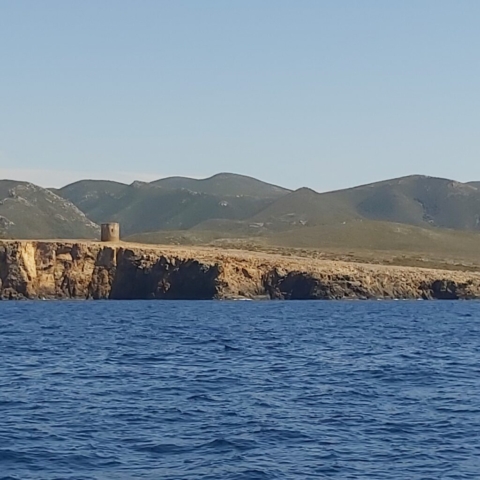 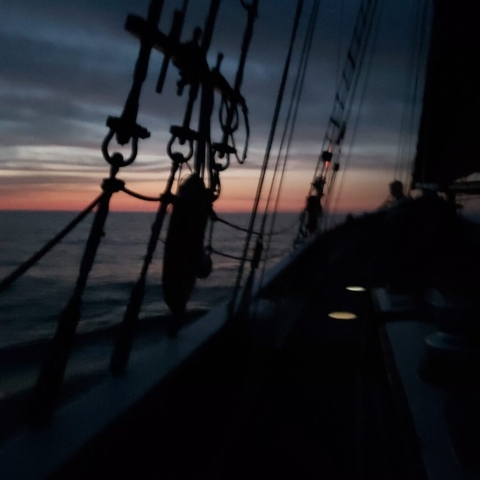 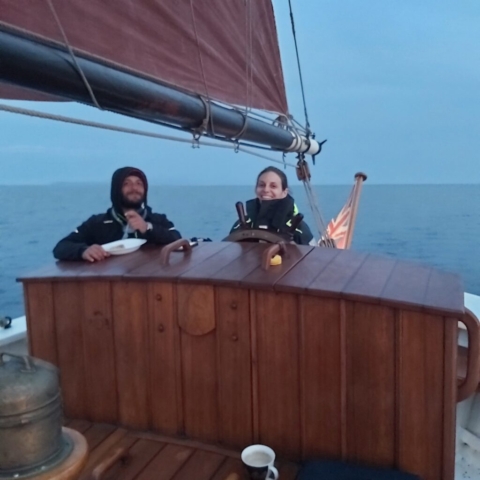 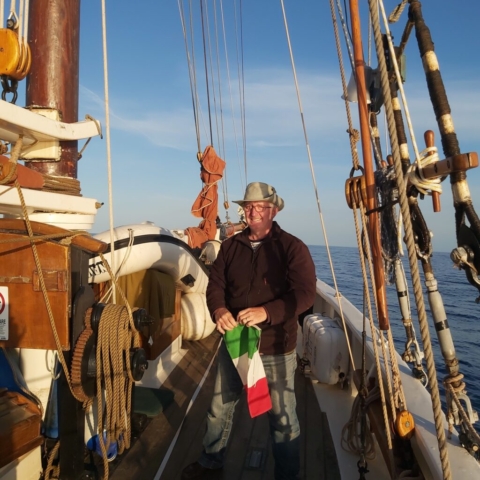 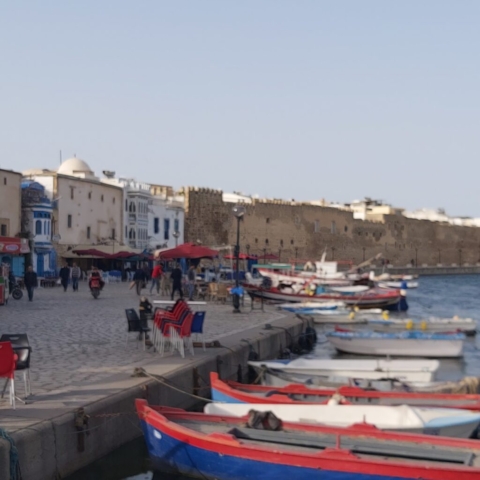 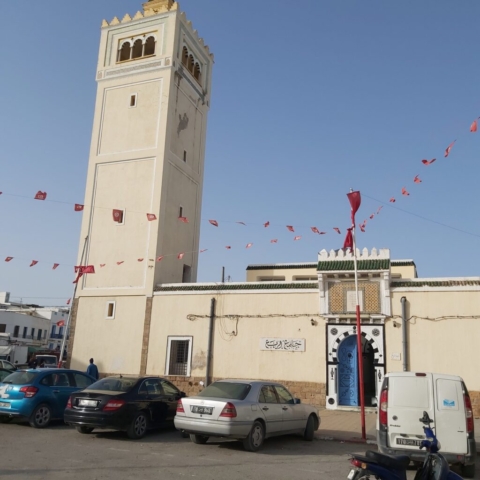 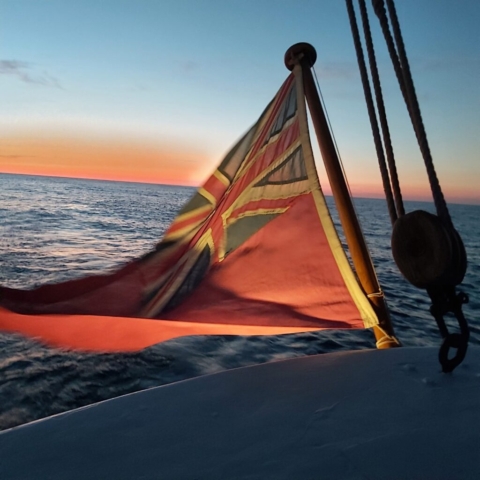 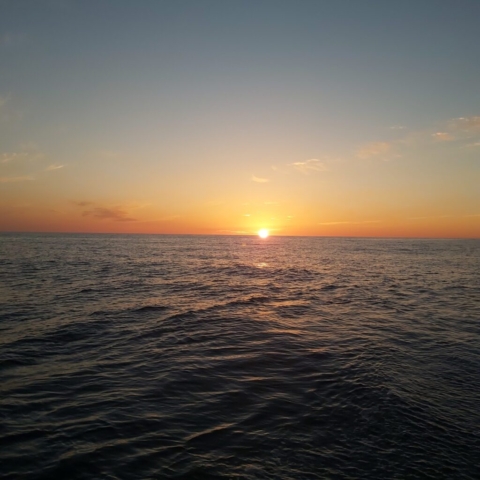 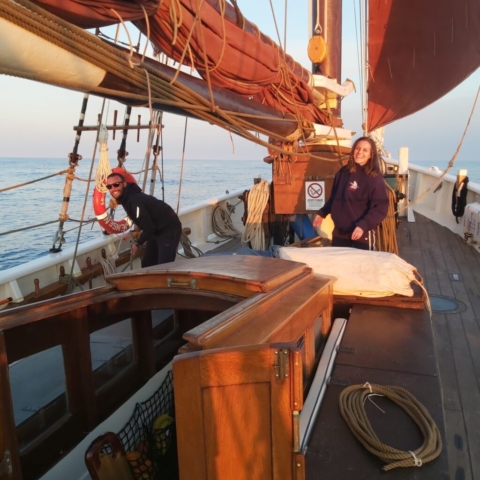 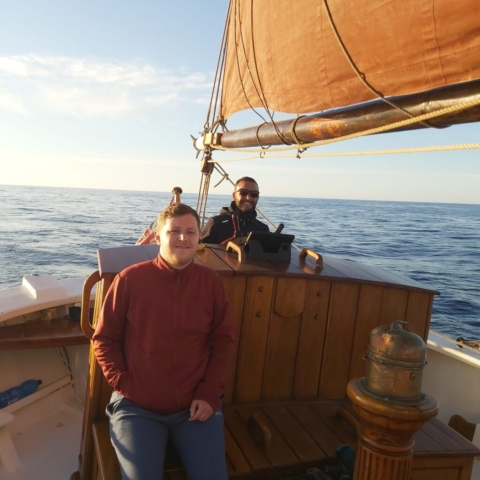 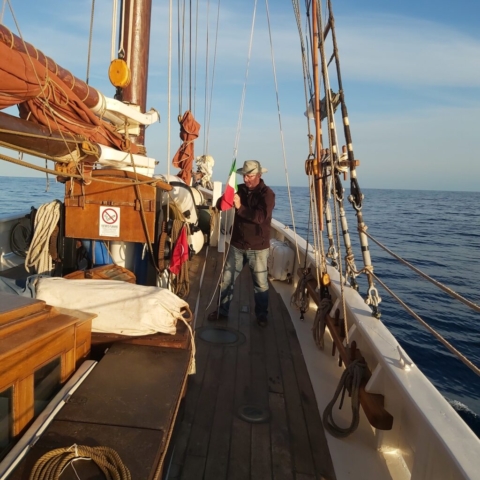 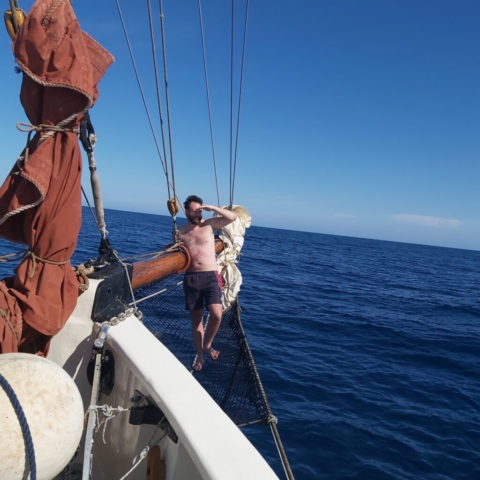 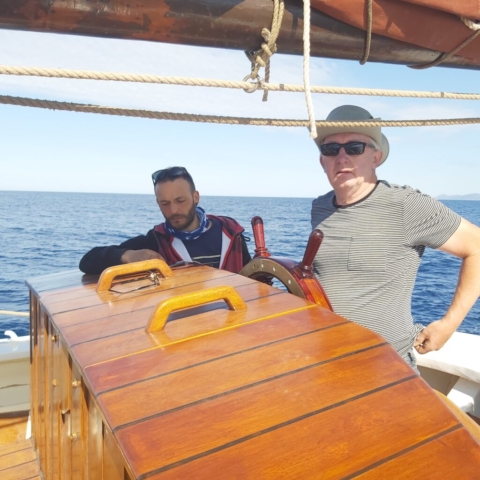